An interview with Aydan Özoğuz, German Commissioner for Immigration, Refugees and Integration 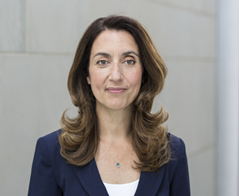 Aydan Özoğuz has been the Minister of State and Federal Government Commissioner for Migration, Refugees, and Integration in Germany since December 2013.  Speaking with Howard Duncan, editor-in-chief of policy oriented journal, International Migration, Aydan discusses Germany’s approach to immigration. This is a condensed version of a longer interview, which can be accessed here.

Germany is the destination for the second largest number of migrants in the world, second only to the United States. Why has Germany taken in so many immigrants in recent years, especially at a time when so many other countries, including in Europe, are heading in the opposite direction? Is it for economic reasons, demographic reasons, humanitarian concerns, or others?

“It’s for both economic and humanitarian reasons. First of all, we are part of the European Union with a common market and freedom of movement of persons. Immigration from other EU member states has always played an important role – and it still does.

The country would be worse off economically without immigration. In 2050, approximately ten million people in Germany will be over 80 years old. The human resources potential would decline tangibly without immigration. We already have a shortage of skilled personnel in many areas – we need carers, doctors, IT specialists, and skilled workers in the fields of technology, mechanical engineering and automotive engineering. We need immigration followed by rapid integration so that the German economy can remain as strong as it is now.

In the case of refugees, their qualifications should not initially play a role. If they can prove why they need asylum and are recognised as refugees, then they can stay in Germany. But naturally, we need to help people who have good prospects of being allowed to stay here to provide for themselves as soon as possible. We have thus amended our legislation so that people who probably will be allowed to stay can attend integration courses to learn German and have employment and training opportunities at an early stage.”

Although Germany has a history of receiving large numbers of refugees and asylum seekers, the welcoming in 2015-16 of roughly one million refugees and other migrants has captured the world’s attention. How would you assess the outcomes of the decision to receive these migrants? How well are the migrants doing in finding housing, employment, health care, and schooling?

“In the autumn of 2015, around 10,000 people per day crossed the German-Austrian border into Germany. At the time, we had to act quickly and to improvise a great deal. We didn’t always get it right. At the start, our main concern was to prevent a humanitarian emergency. Without the support of tens of thousands of volunteers, our authorities and agencies might not have managed to get on top of the situation. We had to help at the time because there was a humanitarian crisis on our doorstep. There was the war in Syria and the difficult situations in Iraq and Afghanistan, but also the terrible conditions on the Balkan route, where refugees without food or shelter, some of them carrying babies or small children, were stuck in rain and mud and camping in cramped conditions outside train stations. We have now come out of the absolute emergency mode and asylum procedures are working in a somewhat more orderly and rapid fashion. Quality assurance remains an important issue here.

Now we are concentrating to a greater extent on the actual challenge, that of integrating people who have been or will be granted asylum. These are people from countries such as Syria or Eritrea who fled war and persecution and will probably not be able to return to their home countries for the foreseeable future. There are three key areas here: language, work and housing. The people who come here definitely need to learn German and to do so quickly. There are state-funded courses to help them. In these classes, they also learn about our country’s value system, what is in our constitution, and citizens’ rights and duties. Overall, the situation has calmed down. More and more asylum-seekers and refugees are able to live in their own apartment. Most shelters are no longer bursting at the seams and we have been able to move people out of almost all temporary accommodation.

In the past few years, many schools have had reception classes for refugee children before they join a regular class. And although the number of refugees registered as unemployed is rising, this simply means that many of them are now registered as job-seekers. According to estimates, around one in two refugees in Germany will have a job here after five years. Naturally, it is an enormous task to integrate hundreds of thousands of refugees, but the prerequisites for doing so are better than ever before in Germany, thanks to its strong economy and support from the public.”

How are German citizens faring? Has Germany begun to benefit from the presence of migrants in its society and its economy? Are Germany’s citizens generally supportive of the migrants or are they finding their presence a challenge? Have the terrorist attacks on German soil had a lasting impact on the settlement and integration of the migrants?

“The history of immigration in Germany teaches us that immigration never shook the foundations of the German state. On the contrary, the economy, the social insurance system and society benefited from it in the long term. It is still too early for these benefits to arise as regards the refugees who have arrived in Germany since 2015, but we have created the conditions for this to happen through social and economic integration, namely access to language courses, the labour market and training at an early stage, but also support in the form of funding worth many billions of euros provided by the federation to the Länder so that they in turn can help the local authorities, where refugees live and where integration happens.

Naturally, the large numbers of refugees have also unsettled people in Germany, who wonder if there will be more competition on the labour market, particularly for low-skilled work. They ask themselves if our schools and kindergartens can integrate so many new people from different cultural backgrounds and if the place where they live will change because of their new neighbours. We take these concerns seriously and policymakers at federal, Land and local authority level have done a great deal to ensure that the local population is not worse off. We have invested more in social housing, job placements, urban development, integration courses and local infrastructure – not only for refugees, but also for everyone in the country. With the declining number of refugees, the debate among the public and in the media has calmed down again.

The attack at Breidscheidplatz in Berlin in December 2016 was naturally a shock for the people in Germany. Committees of inquiry in the Länder are still investigating what happened. The main question that arises is why this attacker was not classified as dangerous at a much earlier stage and deported to Tunisia. Many mistakes were made in the authorities and as regards communication between them. It is perfectly clear that we must take resolute action against people who pose a threat, people who are using asylum as a camouflage and plan to attack people in our country and destabilise the fundamental order. Almost everyone is able to distinguish clearly between an act of terrorism by an individual and the needs of refugees. Nevertheless, right-wing populists in particular are trying to establish a direct link between immigration and criminality. They tell the same old story that there would be no crime without migrants – which has been proven to be complete rubbish.”

“Let me just make clear there was no “decision” to take in one million refugees. Instead, we decided not to close the German borders during a humanitarian emergency.

Germany provides a large number of support services. Even in the smallest municipalities, an initiative to welcome refugees has been set up since 2015. Some are funded by donations, while others have successfully applied for state funding for projects. As Federal Government Commissioner for Migration, Refugees and Integration, I have used a large part of my budget to join up, train and guide voluntary initiatives that support refugees. Voluntary staff need back-up from the public sector so they don’t end up feeling overwhelmed or frustrated because of the work they do – particularly when it comes to such a complex and psychologically demanding topic as supporting refugees. Work in sport and football clubs is especially important, and it is also successful because people meet there simply as human beings and not primarily as refugees or locals.”