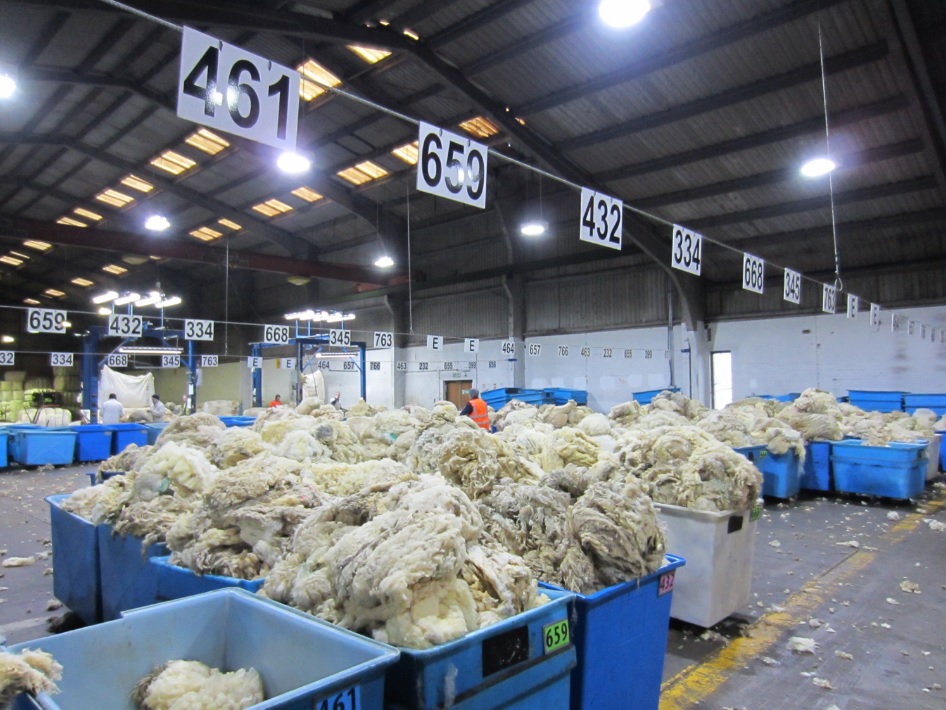 The British Wool Marketing Board grading depot at Newtown

In our recently published paper in Sociologia Ruralis, ‘Unravelling the global wool assemblage: researching place and production networks in the global countryside’ [1] we demonstrated the utility of assemblage thinking for revealing how globalization works through specific grounded relations and connections between places; remaking those places in the process.

Despite being the subject of critique from various theoretical angles for decades, globalization is still frequently deployed as a top-down metaconcept to describe many of the processes and tendencies seen in the contemporary world towards increasing and intensifying political, economic and social connectedness. At the same time, opposition to such complex tendencies have similarly been encapsulated in the sweeping ‘anti-globalization’ rhetoric of Brexit, Trump, Bolsonaro and other populist movements of recent times, often unproblematically.

Assemblage thinking, whilst being far from a uniform school of thought,[2] encourages us to understand society as an assemblage of assemblages; each composed of human and non-human components held together in provisional and emergent relations. In this way, globalization occurs only as interactions between assemblages of varying form and reach. For example, one of the prominent features of contemporary rural localities has been the enrolment of traditional rural economies into transnational networks of production and consumption. The interactions between these rural place assemblages and translocal production assemblages have resulted in the forging of new connections, inter-dependencies, vulnerabilities and affinities between rural places and other, often distant, localities as an articulation of globalization.

We put this assemblage approach into practice through a study of the woollen industry, and specifically the market town of Newtown in mid Wales. In Newtown, the local sheep farming assemblage becomes attached to the internationalised commodity chains of the global wool assemblage. With the relationship between Newtown and wool extending back centuries, our analyses considered how and why this relationship has been reconfigured in the twentieth and twenty-first centuries. One of the interesting findings concerned the role of place, and how place provenance as a source of value had shifted over time as relations within the wool production assemblage have become stretched and reconfigured across space.

During the 19th century Newtown lay at the heart of a global boom in the Welsh woollen flannel industry. At its peak, goods manufactured there, and branded and marketed as from Newtown, were sold across the UK and around the world, enabled by the institutions and structures of Empire. By the turn of the 20th century the Welsh flannel industry had fallen into terminal decline, facing competition from the better connected, larger and more modern textile factories of northern England and America.

These days, the local place branding of wool has become a less significant aspect of its value. Local production is now one site in a global network of numerous goods, including clothing, carpets, knitwear, bedding and insulation. Newtown is still part of this worldwide industry: the majority of Welsh wool passes through what is the UK’s second largest wool grading depot, situated in the town and operated by the British Wool Marketing Board (BWMB). The BWMB provides its 45,000 member farmers with collective sales and bargaining power within the international wool market. It operates an auction house in Bradford where graded wool lots (of similar type and quality) combined from different farms are sold to registered buyers electronically. These are mostly wool merchants who trade internationally and supply manufacturers.

Lots are then shipped to processing facilities, some in the UK, the EU, or China, depending on the end user. There an intensive cleaning process called scouring takes place. Lower labour costs and different environmental regulations have resulted in a significant shift in the primary processing aspects of the global wool industry towards China over the past decade. Only two commercial scouring facilities are still operating in the UK, both in Bradford. This means that British-grown wool may first go to China for cleaning and processing before returning to the UK as yarn for use by carpet manufacturers.

China now buys over 30% of UK wool exports, in addition to buying around 75% of all Australian wool and 25% of New Zealand wool. The majority of British wool exported to China will be finer, higher-value grades for onwards sale to textile manufacturers around the world, potentially returning to Newtown in the form of woollen hiking socks bought online. Coarser textured wool from the hill and mountain sheep breeds found in mid Wales will largely be used for carpet manufacture in the UK and Europe.

What this all means is that that four or five companies and several countries may be involved in turning wool from Newtown into a finished commodity. The complexity of these relations means that it is virtually impossible to trace the provenance of Newtown or even Welsh wool into a specific product within the global wool market. Contrast this with 150 years ago when wool was ‘grown’, processed and turned into a product within a few square miles. Changes in global economic relations (labour, technology, infrastructure, policy and regulations, supply and demand) mean that sites of production, processing and consumption have become stretched across increasingly greater distances. As a result, the nature of the commodity itself has also changed from a place-specific product (‘Newtown flannel’) to a nationally branded and marketed product (‘British wool’) to a ubiquitous ‘everywhere’ product.

Hiding the components, the labour, the organisation, the structures, and the places of the things we consume has almost become a defining central feature of contemporary globalization. Assemblage approaches, in contrast, help us to open up the black boxes of globalization by questioning how and why certain arrangements come into being, are maintained and can also, inevitably, break apart.

[2]  Assemblage thinking encompasses a range of ideas and articulations drawing inspiration from the work of Gilles Deleuze and Felix Guattari, Michel Foucault, and the ‘actor-network’ school of Michel Callon, John Law, Bruno Latour amongst others. We have been particularly influenced by the work of Manuel DeLanda and the practical framework for assemblage analysis he develops in A New Philosophy of Society (2006) and Assemblage Theory (2016).