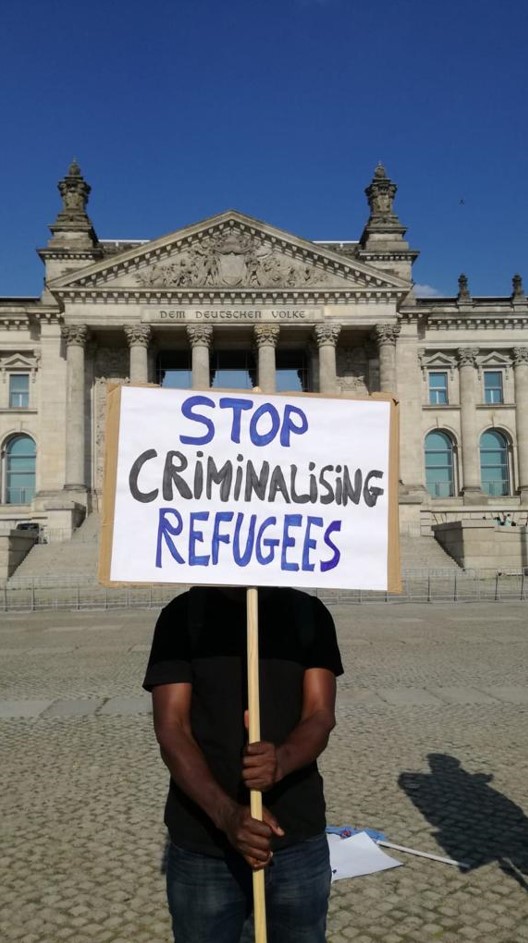 Nearly 10 years ago, dozens of refugees set up a protest camp on Oranienplatz, in Berlin Kreuzberg. The protest camp gave rise to the O-Platz refugee movement, which is still nowadays very much remembered by activists in Berlin. This article complements my recent publication in Sociology Compass.

I learnt for the first time about O-Platz in early 2014. I was then travelling around Germany to research racist hate crimes. The protest camp had often been the target of racist violence, in a context overwhelmed by the rise of anti-migrant parties and movements, such as PEGIDA and Alternative for Germany (AFD).

In October 2012, following several cases of suicides and suicide attempts by refugees, activists marched for 600 km from Würzburg (Bavaria) to Berlin, where they set up the protest camp. When the local authorities evicted the protest camp in April 2014, the grassroots mobilization against border regimes entered the twilight of its most visible phase.

I returned to Berlin for an extended period of time in 2018 to conduct, as part of my doctoral research, an ethnography of the grassroots resistance against border regimes. In January, a few days before reaching Berlin, the remaining residents of the former Gerhart Hauptmann school, which had been occupied shortly after Oranienplatz, decided to leave the premises, ahead of the eviction scheduled by the local authorities.

When I arrived in Berlin, I knew that the vibrant times of the mobilization centred around the protest camp were long gone. However, I could not help feeling slightly disappointed as I had not had the chance of soaking in the optimism that I imagined O-Platz had inspired.

In the first months of my stay, I attended dozens of protests. While the activists’ determination in challenging border regimes was remarkable, they attracted only a few hundred activists, were ignored by mainstream media, and rarely fostered new alliances. Opposite images of O-Platz conjured up: a dynamic resistance able to attract people who had taken it to the street for the first time.

I shortly realized that the perceptions of many of the activists whom I met mirrored mine. This awareness triggered my interest in understanding how activists interpreted O-platz several years after its eviction, what O-platz meant for them, and how collective memory may bridge past and present phases of the resistance against border regimes.

When I asked Joanne, a refugee activist from Kenya who had participated in O-platz, to tell me the main achievements of the protest camp, she emphasized: “We [refugees] got a face, we took a space. The O-Platz movement changed German history because refugees became visible for the first time.”[1]

O-Platz was different from past grassroots mobilization, which mostly took place in remote asylum shelters located in rural areas or in city suburbs. In contrast, activists chose to set up the protest camp in Berlin Kreuzberg, originally a working class, migrant neighbourhood that became the centre of activism after the fall of the Berlin Wall, as much as of the gentrification of Berlin. Its central location, however, does not fully explain the association between the protest camp and visibility, which is embedded in the activists’ collective memories.

Activists perceive O-Platz as a collective action where racialized refugees had a frontline role, especially as they formulated grievances and claims against border regimes closely associated with their lived experiences of oppression. That is why they remember it.

Refugees were forced to live in isolation, were neither allowed to move freely around Germany nor to work, and received limited welfare benefits provided as food vouchers. Based on these experiences, refugee activists opposed the unfair asylum system, which often resulted in the denial of protection and residence rights. They demanded unrestricted freedom of movement and residence rights for everyone, irrespective of legal status.

In contrast, other aspects of the protest camp were less salient in the activists’ memories. For example, the formulation of common demands by refugees was complicated by their different legal status. Indeed, while some refugees claimed asylum in Germany, others moved to Germany from Italy before the Italian authorities had processed their asylum claims. The latter were at risk of being forcibly returned to Italy in view of the Dublin rules[2]. Activists did evoke these aspects only in longer conversations about O-Platz, when they had time and space to elaborate on their views of the protest camp.

One of the contributions of my article is to explain why activists remember some characteristics of O-Platz more than others. Collective memory work operates through the selection of characteristics of O-Platz that serve as aspirations for the present. The visibility of grassroots refugee activism, for which O-Platz is remembered, is all the more important in 2018, when the tightening of border regimes and the rise of populist radical right parties and movements sparked the mobilization of new networks and organizations.

“Now we are in defence mode”

When I asked Anne, a German activist who had participated in O-Platz, to describe the resistance against border regimes in 2018, she told me: “Now we are in defence mode. It’s mainly about organizing small actions, it’s invisible… there are no big events or struggles”.

Joanne emphasized the different role that refugee activists played in 2018, compared to O-Platz. She explained: “Nowadays, there are many platforms, but refugees are not there, they remain a ‘thing‘”.

In mid-2018, the resistance against border regimes intensified as the German authorities further tightened border regimes. New policies restricted family reunification and established new multi-functional reception centres, the so-called Anker centres, where asylum seekers had to live for many months. In the same year, the newly elected Italian government scaled-up the criminalization of search and rescue NGOs active in the Central Mediterranean Sea.

Some large protests happened  in the second half of 2018. For example, in July 2018, Seebrücke, a network of activists, organized large protests in many German cities demanding safe and legal routes for refugees, and opposing the criminalization of search and rescue operations. On 13 October 2018, Unteilbar, a large coalition of NGOs, trade unions, and grassroots organizations succeeded in mobilizing a quarter of a million people who marched  to oppose the rise of populist radical right parties and movements.

However, in contrast with O-Platz, these initiatives were not centred around racialized refugee activists and their lived experiences of oppression under border regimes. Essentially, these organizations did not demand universal freedom of movement and residence rights for everyone.

The coalition Unteilbar asked for the respect of the right to asylum, which does not fundamentally challenge the state power to deny protection and residence rights, and to deport people after a fair assessment of their asylum claims. Seebrücke demanded safe and legal routes for refugees to reach Europe but did not claim residence rights for all refugees who were already in Germany.

In 2018, activists perceived that the frontline role of racialized refugee activists, the main legacy of O-Platz as it had provided visibility to grassroots refugee struggles, was fading away. Despite an intensified resistance, some of the new networks and organizations did not ground their demands in the lived experiences of racialized refugees. Grassroots activists responded to these changes by constructing and evoking collective memories that provided guidance and aspirations for their current mobilization.

Memories of O-platz are constructed as aspirations for the present

The memorability of O-Platz plays also a significant role in the present resistance against border regimes. Activists remember O-Platz as a mobilization centred around refugee activists precisely when they perceive that the very legacy of O-Platz is fading. Memory work does not limit itself to signalling discontinuity between past and present mobilization; it also transforms characteristics of past mobilization into aspirations for the present that could address, and possibly transform, that perceived discontinuity.

[1] Activists make use of the category of refugee beyond its legal meaning. Most of the people who self-identified as refugees had precarious legal status. This self-identification challenges restrictive categories that the state uses to divide migrants and deny them rights (Perolini, 2022).

[2] The Dublin III Regulation (604/2013) establishes the responsibility for assessing asylum applications among EU countries. The general rule, except for minors and family members of asylum seekers and refugees, is that the first country of entry into the European Union is responsible for assessing the asylum claim.